UP Doctors Retirement Age Limit: You are Here to Check Retirement Age for Doctor & We have also written on Retirement Gift For Doctors. We expect those doctors who are reading our posts may in Operation Theatre, Or on Duty or wants to check latest news on Doctor Retirement age in up. This update belongs to 26 April regarding Doctor Pension Taking Age, Sevanivriti (Meaning in English Retirement).

Doctors of UP don’t want to increase their Ayu Sima of Retirement age. As per some news is viral on internet that age limit of doctors may be extended to 62 years or it can also extend to 70 years. Association of UP Medical Officer have given green signal to make doctor retirement option of 60 years but they don’t agree to extend retirement age up to 70 years.

Shortage of Doctors in UP: In 2017 The Data released to wake 7398 posts of PMS doctor urgently required in Uttar Pradesh State. Government unable to fill half of Doctors posts in there which resulted to make demonetization type crowd in Hospital Computer Wards. But situation become worst when some doctors starts making money after installing or writing medicine to company they join.

What Medical Doctor Sangh Think about age Limit: Statement says Previous doctor age of retirement was 58 year but now 60 years, but after seeing doctor shortage government extends it to 62 years. In April UP Health department wants to make doctor retirement age in UP 70 years. 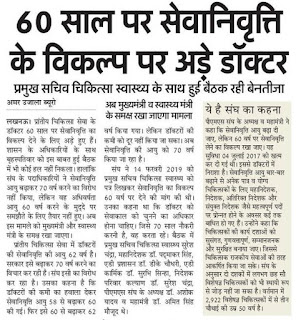