Famous Bangladeshi Actor Latest News from West Bengal who is campaigning Mamata Banerjee Led Party TMC Congress order to leave India as soon as possible. As per News from Dainik Jagran He is Famous Model and Actor in Bangladesh and has done acting in many West Bengal Films.

Why He Order to Leave India: This Is Election Time in India, and Government wants no more foreign Interference should be there in India. Eci (Election Commission of India) said Firdaus was supporting tmc Congress in West Bengal District.

Actor Ferdous Cam India on Business Tour but he illegally supporting TMC Congress without taking any permission from Election Commission of India who is now become powerful body of India After Supreme Court of India. Bhartiya Janata Party complaint to ECI about Bangladeshi Actor.

Election Commission of India Blacklist Actor Ferdous: One of Officer in Home Ministry said,” we have found Ferdous Ahmad illegally broke the visa rule of India in West Bengal. So we have blacklisted him and entered his name in Black List of Not entering India up to Election.

Where Ferdous is Compaining in India: Hemtabad and Karandidhi is popular area where many large amount of Fan found for Firdaus Ahmad. 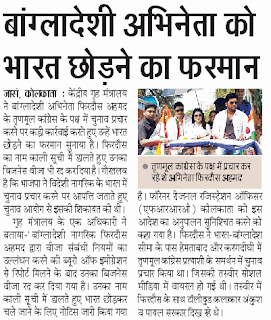