- February 19, 2019
UP Police Constable 41520 Constable Result 2019: on 18th February up police Recruitment board has declared 41520 constable result without any hesitation. so now all buddy is waiting to see their name list of selection where they have to join.

41520 Constable Result 2019 of another second state also perform well. total 1024 candidates were able to get constable jobs in up and mostly they are from Hindi states such as Bihar 617, Haryana 146, Madhya Pradesh 104, Rajasthan 85, Uttarakhand 36, Delhi 31, Jharkhand 4 and Maharashtra 1.

District who unable to perform well in up police constable selection process is Lucknow, prayagraj, Bareilly, Etavah and Kanpur district has less than 500 selection. 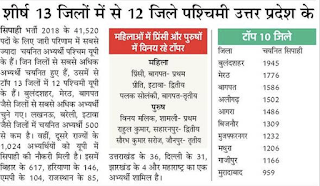