UP Mini Ayushman Yojana Chief Minister Adityanath Yogi Govt have announce the Mini Ayushman yojana For Uttar Pradesh. In this so called Ayushman Yojana which started by pm modi government is now became the worlds biggest health care scheme in the world and we all know that how it became and what is the factor on democracy that except all rules which implemented by Current government or any other government.

Mini Ayushman Yojana: Their are many people in India who dont have internet in their village but Ayushman yojana is something different due to it Ayushman Mitra/Arogya Mitra. Both mitra (Ayushman/Arogya) will make camp in your Town, City, District, mohalla and through loud speaker they announce to Make Ayushman Yojana For Frees.

Why Yogi Government Launched Ayushman Yojana as a Mini ayushman yojana:
1. For your kind Information Uttar pradesh is one of the Biggest State in India that have largest population. Their is Agra in Taj Mahal, Kumbh Mela in Prayagraj etc that attracts largest number of tourist in the world.

2. District to District we will see something history attached to all communities.

3. The Main objective to launch Mini Ayushman Yojana is select those benneficiaries who are late to apply during season of making ayushman yojana card or golden card. 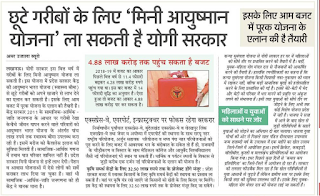