up city bus recruitment 2019 in todays government jobs in up we have found hint of upcoming Uttar Pradesh State Road Transport corporation vacancy. The clue where we found parivahan nigam bharrti is bus conductor, bus driver salary issue raised in Lucknow city bus transport. for more details on how many vacancies will be coming in city bus transport department of Uttar Pradesh. You may have to subscribed us first from email, facebook or twitter account.


how to become bus driver: In a board meeting of city bus transport organised on saturday by UPSRTC Zonal Secretary (Mandal Ayukt) on salary issue, upcoming bharti in city bus transport, yatri satisfaction and implmenting several scheme that can benefit both parivahan nigam and its employee. Lucknow City Bus Mandal Ayukt Anil Garg said in a board meeting when somebody ask salary question. The in a reply he said fixed salary is under scheme of Utkrisht Protsahan Yojana will be paid up to March 2019. After that Rs 17,000 per month salary amount decided by up govt.

On circular basis city bus department will fill Samvida parichalak posts. Either in february or in march next jobs is coming for city bus transport department of Uttar pradesh. 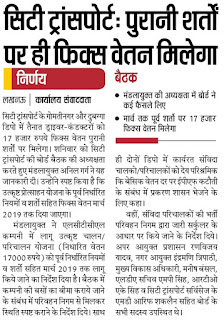