UP Board 12th Pass Jobs Scheme 2019 There is golden chance for students who will seat in UP Board Inter Exam 2019 because Deputy Chief Minister of Uttar Pradesh Shri Dinesh Sharma commented on upcoming jobs opportunities for students who will pass intermediate through CBSE or UP Board. He further said on right to reply that We are making special diploma course for HE/SHE that can get 100% percent jobs placement when they complete ITI diploma courses after Inter.

Inter Pass Jobs 2019: Government has made a contract with HCL company who will trained the Youth according to current jobs sector. The Most important things to become eligible in UP Government inter pass or 12th pass scheme is Girls and Boys should pass 70 percent marks in 12th whether they belongs to CBSE, ICSE, UP Board, Sanskrit Board or Madarsa Board. Talking about ITI certificate that govt said to provide is affiliated to Rajasthan University (Name not known). Shri Dinesh sharma said we are going to open another investor summit in which top international companies come here for investment.


HCL 12TH Pass Jobs Scheme: Not Only HCL, some other Information Tech companies Infosys, HP, Wipro were interested to make UP on Gujarat Model. The Main aim of UP Government is to stop migration of jobs and people to other states and too developed UP as Industrial States. Uttar Pradesh from its population and Area is one of the biggest states in the world but it left behind due to late implementation of policies starts by all government which rules UP for its own purpose.

Eligibility criteria 1. Bring 70 percent marks in 12th to get jobs in HCL. 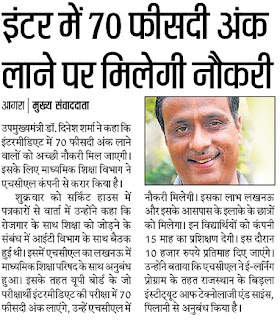