Ex Army Jobs In Railway Indian Railway is Going to fill 836 vacancies of Gateman jobs in Varanasi, Lucknow and Izzatnagar Mandal. Railway Recruitment Board wants to change some rules and regulation on Railway Crossing Gate which are very dangerous crossing of oneway to another way. Now days orverbridge in all states of India is constructing in vast manner so that people can pass Railway Phatak without any hesitation or thinking when will next train pass or when railway phatak open. For More details on how to apply Railway Gatemen Jobs for Ex service men than for you kind information 99 % department of India wants to make their department in disciplined manner and Army, Navy and Air force can do it.


Age Limit for RRB Varanasi Recruitment 2019: Their is no age limit to fill Railway gatemen vacancies according to current guidelines.

Selection Process For Railway Izzatnagar Mandal Jobs for Ex Servicemen: Selected Persone will be send one call letter or intimated through mobile that HE/SHE selected in Railway Ex Servicemen openings. 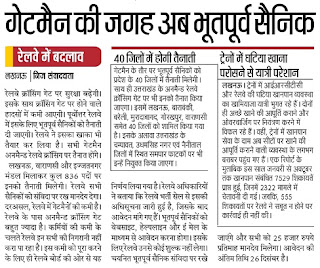