Poreta Paddhati: Now all Bus Conductor and driver will get salary on Poreta Paddhata. It means if you complete 6000 Kilometre on 200 KM daily basis for 3 month than your salary will be calculated on your your 3 months perfomance. 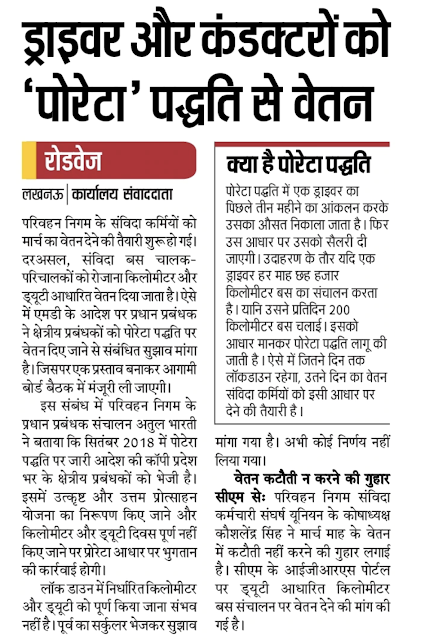 Holi Bonus For UP Bus Conductor Employee: If you will work for 9 days during Holi Time than you can earn more than Rs 3150, For 10 days 4000, people who are working in local area office. They will get extra Rs 1200. 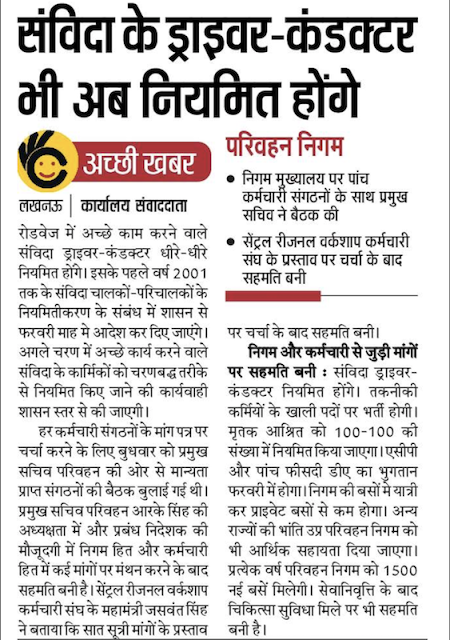 Roadways Driver Conductor Allowance: We know you are waiting to check our updates on Rs 400 Bhatta and Diwali Bonus for UP Roadways employees. Here is important news viral today on 11 October. You must check and daily visit our portal subscribe with email. 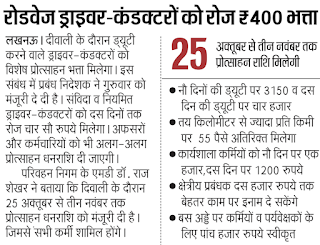 UP Roadways Bus Conductor Salary: From 1 October 2019 roadways conductor and driver will be getting additional salary in their salary account. Their per day salary increased as 14 to 25 paisa per kilometre. More than 34000 samvida chalak, parichalak are working. 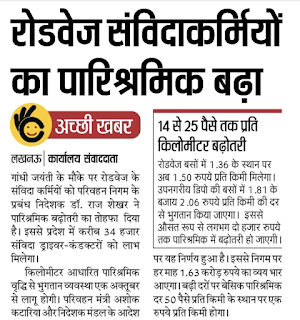 UP City Bus Conductor Fixed Salary: below are important rules to take per month Rs 17,000 salary for city bus conductor. In this way 1100 city conductor employee will be benefited. 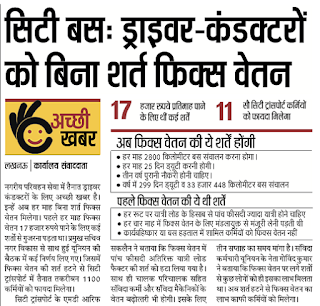 UPSRTC Salary Update 16 June 2019: Thank you for visit our website daily, it will help us to know that you are interested in reading our posts daily. so here we are giving some news on up bus conducted salary is 32000 samvida conductor chalak per month payment may be added with some more money.

UP Bus Conductor Fixed Salary 2019: 3000 Bus Conductor salary is on danger mode due to many drivers are on election duty so they unable to jobs on ground level. However they may soon get samayojan in to permanent jobs. 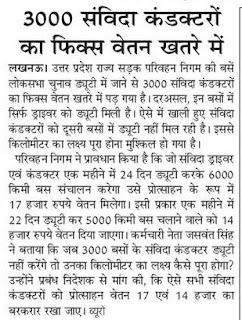 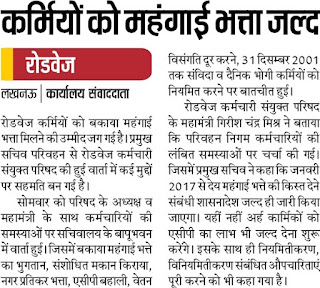 Note: we are sorry for late updation of this posts.

UP Bus Conductor Diwali Bonus 2018: Latest News 3 November UP Government order to pay before 6th November to up roadway 35,000 samvida karmi according to regular and temprorary basis.

UP Roadways Karamchari Sangh Hadtal from 30 October to approve below points:-

1. Parivahan Nigam into Parivahan Vibhag.
2. According to Highcourt order salary should be made.
3. Arrea of 7th pay commission
4. Samvida Driver Conductor should be permanenet.
5. Chalak may be appointed/promotion to bus conductor.

Conductor Salaries in UP: Latest News 27 September UP Government has fixed 288 days salaries of 17,000 per month received in bank account. 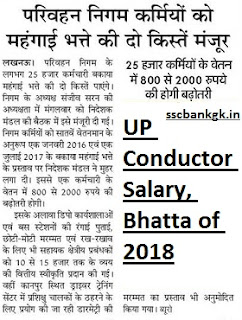 UP Bus Conductor Pay Scale Remuneration Pay scale:- In Making Remuneration of  Bus Conductor. The Bus Conductor Kept for contract basis up to 2 years, After 2 years they will join the pay band of Rupees 5200-20200 grade pay 2800/-. Many Bus Conductor Make money on road because money given by govt is not sufficient and they always protest to increase, Salary hike like topic we time to time found in local newspaper. So it is good to earn commission through government rules and Bus Driver Rules. Both can survive in this world.

UPSRTC Bus Conductor 7th Pay Commission, Latest News:- It is not clear when Bus Conductor, Driver get Salary on 7th pay commission. The State government is far to accept salary of Bus conductor or driver in 7th pay. May be in UP Election, UP Govt passed the budget than it almost crosses 40,000 per month for bus conductor on Hand 30,000 per month of Driver.