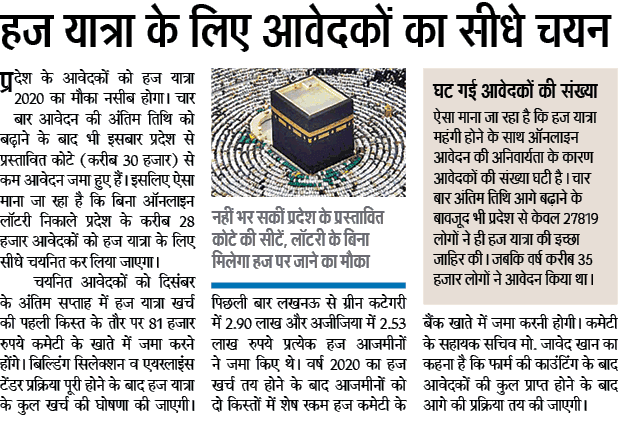 Haj Online Application Form 2019 For Haj Registration is Started from 15 November to 24 January 2019. Applicant are invited to check all details HAJ Committee of India centre in Lucknow, Kerala, Aligarh for document submission and verification. Other Updates Like Hja qurrah Lottery result 2019 soon updated by us after HAJ Seat allotment under Government Kota seats for haj visa Return,  date of passenger.In state Bihar hajj application form status 2018 you get below bihar state haj committee.org and UP hajj yatra 2018: up haj committee.com.In Haj 2018 latest news Information and Downloads will be available soon. The Haj Committee of India There shall be in the HAJ waiting list 2018 for Provisional selections shall. 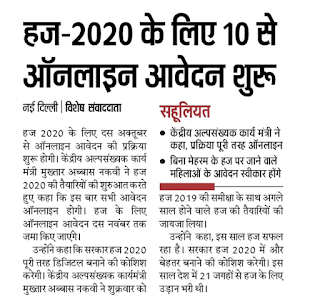 Haj 2019: if everything is alright than Haj 2019 application will be in October Month. People who are keen interested to go Hajj 2019 they are adviced to make document according to adhaar card. For More details on Haj Form 2019 Check below news.

Haj Women:- This year 1300 haj women has also apply to go without Marham.

Note:- Before 48 Hours candidates are requested to attend the report during 48 Hours in Ali Memorial Haj House.

Haj Lottery Amount Last Date Details: Latest News UpdateHaj Committee extended the day of Rs 81,000 First amount to be paid before 12 February 2018. And Lottery draw is available in all States website of Haj committee of India.


Muslim women Haj without male: Central Govt has approved budget and given facility to all female who want to go haj without male.


HAJ Registration Form 2018: Haj Committee has extended the Last date to fill form of Haj, which is now 22 December and in January 1st week Qurrah form submitted. Waqf Board will Give Form. You can get Haj Form 2018 from District Minority Department (Alp Sankhyak Kalyan Vibhag). Bank Will Take registration Fees from Monday.Application Form will be filled Online from Haj Committee of India.

Hajj Latest News Today 2017: Their will be no issue of passport after 24 January 2017. Aazmin who want to go for Hajj are advice to visit hajj committee office after 2 January to Last Date 24 January 2017.Submit your passport and Haj bank payment Before 31st March.

Application Fees: Non refundable Processing Fee For each applicant, other than infant, a non- refundable processing fee of Rs.300/- is to be paid

How to Apply for HAJJ 2017: For More details on Qurrah Result click here

(a) HAF can be submitted online at hajcommittee.gov.in or through android mobile app “HAJ COMMITTEE OF INDIA”.
(b) HAF can also be filled and submitted manually.
(c) HAF should be filled in ENGLISH BLOCK LETTERS only.
(d) Applicant's latest photograph should be pasted on HAF

Proof of Residence: If present address is same as recorded in passport, copy of passport will be sufficient with Aadhar Card

Mobile: Applicants should give their valid mobile number on which they will be able to receive the SMS's sent by HCoI.

Qurrah: Qurrah refers to computerized draw of lots. Divided into seats allocated to each State/UT shall be allotted to the applicants Reserved Category, Fourth Time applicants and General Category.

Selection from Waiting List: When seats become available due to cancellations or other purpose.

Confirmation: After depositing the Advance Haj Amount of Rs.81, 000/-, the provisionally selected pilgrims shall submit a copy of the pay-in-slip along with medical certificate

UP Haj Passport After 24 January which will issue will be invalid: Click here 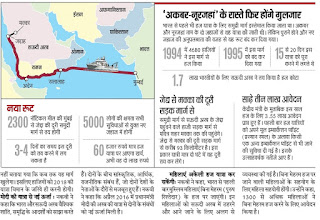 UP hajj fees 2018 India: On 27 March Guideline set for 29,000 Haj candidates to submit first kist 81,000 (with pay in slip, reference number and cover number) before 5 April 2017 by filling Haj form 60 Number with pan card and aadhar card.Those candidates who will not submit fees on 5th April their application will be cancelled and transferred to waiting list people. Selected candidates last date to submit Passport and Medical certificate is on 13th April 2017.


Medical check up: Hajj pilgrims will have to go through medical check up Medical screening and Fitness Certificate must be filled compulsorily by Doctor preferably MBBS / Govt. Doctor. Signature of Medical Practitioner with complete address and Seal stamp put here

How to fill Haj Online Form 2017
The Guidelines for Haj-2016 also available on hajcommittee.com) should be read carefully with new eye before filling Haj Application Form (HAF).

Haj Passport details, applicants Bank details, latest photograph, address, etc be kept on handy.
Address and other information should be furnished correctly in the HAF. False declaration may lead to rejection of application and forfeiture of the amounts deposited.

Remember that fields marked with asterisk (*) are compulsory and can’t be left empty.

Before clicking on Next submit button, double-check that all details/entries are correct. Any modification of the application is not allowed after NEXT submit button.

Haj apply online procedure 2016
1. Type the URL www.hajcommittee.com in your web browser. You will get the following screen.

2. Click the button of New Haj Form Registration 2016. You will get the following screen. Enter details of ‘Cover Head’ (has to be a male adult):

4. The size of the cover shall be minimum 1 and maximum 5 adults + 2 Infants only. If the number of family members exceeds five, applications should be made in more than one cover

6. If you have selected (general, obc sc and st) Reserved A (Age 70+) enter the Companion’s name & Relationship. (Details for eligibility for Reserved Category are given or have selected Reserved – B (4th Timer) enters the haj Cover Numbers of last 3 years.

7. Haj candidate Bio-Data (As per International Passport) Enter candidate passport details. Must be an Indian international passport issued on or before 20.02.2015 and valid at least upto 20.03.2016.

8. for other than Cover head: If selected Gender is Female, enter details of Mehram: passport No, Mehram relationship and Mehram Name

13.After entering details of all applicants of Cover, click the NEXT submit button.

14. You will get the following screen, showing a message “Your Entry has been completed’ and you’re haj Group ID. The group head will be allotted a unique system generated Group ID Number. Note down that ID Number. It can be used for taking print out.

Haj Latest News 2017: In Update of 31st October UP Haj Committee of India said from next year Haj yatra will be Rs 50,000 more cheaper from Ships and Airplane. New high speed ships will reach to Jeddah in 3 days. 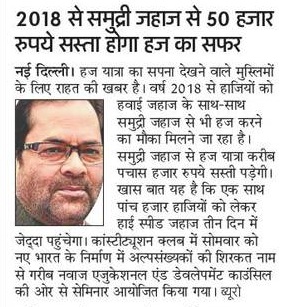 Latest News Update: on 4 April UP State Haj Committee has extended the date to make Payment up to 13 April 2017.State Haj committee Mohammad Jubair Ahmad Khan have said after last date they will cancel Haj yatra who will not produce important document and Rs 81,000.

Haj Allahabad Kaushambi Latest News 2017: For going to haj in 2017 from allahabad 518 (in which general 120) candidates selected and from Kaushambi 143 people.

Haj Latest News 2017: Central Government has issued list of candidates who will go for Haj good news is 7000 increased seats were added with candidates name The Haj quota for the Uttar Pradesh states was released on Uttar Pradesh Haj Quota Seats: 29.000 more compared to previous year 7,000 seats and the process for selection, Qurrah and Lottery of pilgrims will start after new government issued from March 14. Saudi Arabia has increased the annual Haj quota of India by 34,005 before two month ago in January. 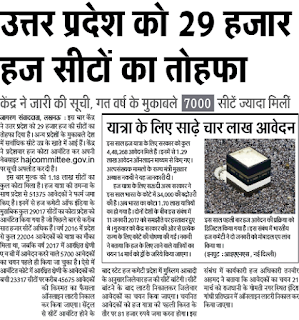 Haj Online Lottery Result 2018: Good News for those who are waiting for UP Haj Yatra Seat List, Lottery News and Qurrah Result started from 14 to 21 March 2018. According to state Haj committee 52,000 candidates shall applied and fill application fees and in next week Central Government will announce haj result 2018. Below read Notification

6 February is the Last date to apply for Haj and those candidates who have not yet applied to go for Haj in in Saudi Arabia are suggest to apply up to Mid night.Haj last date may also extend for 2 or 3 days. More 33,000 people this year applied and up to 32,000 may go to haj in 2017. Download Notification Haj Lottery Last Date 24 January to 6 February 2017 Latest News: Click here  Updated on 25 January

Haj Avedan Form: After exceeding 34500 seats is reserved for haj yatra by Central Government which is good. Haj total applicant not crossed above 20,000 like previous year 2016 total 34000 applicant have applied for haj.To increase haj applicant Haj committee office in Lucknow will be open on Sunday also

Haj Committee Health Card: Indian Government will give their citizen Haj Health Card, so that they can get good medical check up, free help assistance from doctors

Haj Subsidy Amount: Central Government is taking action to cut subsidy (Total amount 650 crore ) on Haj (for approval by senior Haj committee people) if subsidy will be removed from Haj than 1 Ticket will be costs 70,000. Below are some Price Ticket of Lucknow to jeddah , Banaras to jeddah and Delhi to jeddah airport.

Haj Lottery Draw 2017 Date Latest News: On 10 January UP Haj committee said that their will no draw and lottery for above 70 Age Limit (Senior Citizen).2nd Good News is those candidates who have apply for haj more than 3 times will get preference and get direct selection in Haj 2018. 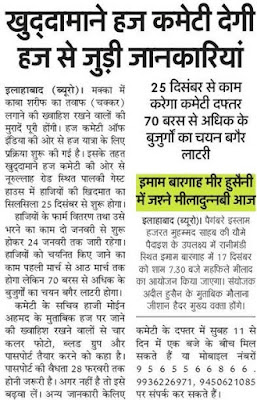